Sports economics’ theoretical base is nested heavily in theoretical and empirical microeconomic analysis with far reaching applications. Sports economics modules offer a range of transferable and specific skills that can be applied to a range of job opportunities, particularly in the ever- growing sports and leisure industries, local government and tourism.

The central theme that characterises sports economics is that competing teams must co-operate, to some degree, for a meaningful schedule of matches to take place. This gives rise to two terms: uncertainty of outcome and competitive balance. Specifically, the attractiveness of a given fixture will be enhanced if the outcome is uncertain; matches which are foregone conclusions will be less attractive in the long term to paying spectators, as well as to the media. Thus, it is in the interest of a league to sustain fan interest for as long as possible by providing fixture lists between equally matched teams. 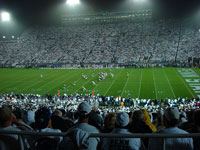 Mechanisms to promote team equality vary. Typically, European leagues are merit-based; vertical hierarchies enable poorer performing teams from a higher division to be replaced by better performing teams from a lower division through a process of promotion and relegation. In sports such as football and rugby union, the very top teams in the highest division also have the opportunity to compete against the best foreign teams in European competition.

In North America, where geographical distance plays a significant role in determining which teams can play against each other on a regular basis, leagues are ‘hermetically sealed’ with no promotion and relegation. Restrictions, such as salary caps and limits on the size of a team’s playing roster, prevent richer teams from hoarding the best talent. Inevitably a substantial literature has evolved, both in terms of how best to measure competitive balance unambiguously and its policy implications.

As a literature, sports economics originated in a seminal article by Simon Rottenberg (1956) which focused on the prevailing restrictions in the labour market for baseball players. Since then, the literature has grown exponentially, particularly over the last 25 years or so. The shift of sports economics away from the periphery of the economics discipline is evidenced more recently by top international journals devoting whole volumes to sports-based economic analysis: The Scottish Journal of Political Economy (2000, 2007), The Economic Journal (2001) and The Oxford Review of Economic Policy (2003). There is now a dedicated journal devoted to the growing body of research into professional team sport, namely the Journal of Sports Economics.

The earlier literature had a strong focus on the major North American leagues (baseball, basketball, football and (ice) hockey). This reflected the fact that detailed data sets were readily available, thereby providing a ready-made laboratory for the analysis of economic propositions. Furthermore, professional team sport in the North America tended, relative to Europe, to have a more business-like edge with regard to its organisation and supply. More recently the economic analysis of football has become particularly prominent as concerns have emerged about the potentially detrimental effects of highly affluent teams dominating domestic and European competition.

Sports economics links directly to a range of sub-disciplines within the broader economics literature such as industrial economics (e.g. league organisation and the relationship between teams), theory of the firm (e.g. the validity of the profit maximisation assumption when many sports teams persistently lose money), labour economics (e.g. the impact of labour market restrictions which reduce player mobility and impact on wage rates) and demand theory (e.g. measuring the impact of different variables on game attendances). Thus, sport offers an array of highly relevant applications to the economist.

Next: Tips for Working Efficiently