Environmental economics will help you understand some important and controversial issues – such as climate change policy, nuclear power, recycling policy, and traffic congestion charging. This is an exciting field of economics to study, and very much at the heart of many public debates and controversies.

In very broad terms, environmental economics looks at how economic activity and policy affect the environment in which we live. Some production generates pollution – for example, power station emissions can cause acid rain and also contribute to global warming. Household consumption decisions too affect the environment – for example, more consumption can mean more waste sent to polluting incinerators or garbage dumps. 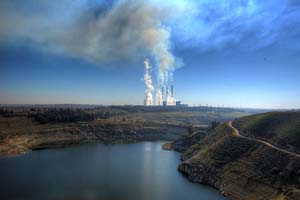 But pollution is not an inevitable consequence of economic activity – governments can require polluting firms to reduce their emissions, and can encourage people to change their behaviour, for example by levying taxes on polluting goods. Generally, though, these measures will involve some costs, such as the cost of installing pollution control equipment. So there is a tradeoff: a cleaner environment, but economic costs. The central questions in environmental economics concern this tradeoff:

(1) If environmental protection is costly, how much should we spend on pollution control? Is it worth reducing pollution to zero, or should we accept some level of pollution because of other benefits associated with it?

(2) In making these decisions, how can we compare the benefit of a ‘clean’ environment with the costs of pollution control? Unlike many of the conventional goods and services that contribute to household living standards, ‘clean air’ and other environmental goods do not have market prices, so we need to some other way to work out how much they are worth. What techniques are available to help us do this, and how reliable are they?

(3) Is government intervention in the economy needed to reduce pollution, or can we rely on the market economy to get us to the optimal outcome?

(4) What form should government policies to cut pollution take? Why does Europe operate a ‘cap and trade’ emissions trading scheme rather than impose a carbon tax?

Courses in environmental economics will vary in the emphasis they give to these issues – and some may also discuss issues of natural resource scarcity as well. Most will include some microeconomic theory, looking at how firms and individuals behave when production or consumption involves externalities. Some courses may also look at the methods used to measure environmental benefits, especially where students have already studied some econometrics. But analysis of policy issues will be an important part of nearly all courses in environmental economics.

VoxEU’s section on the environment

Oikos is the international student organisation for sustainable economics and management and a leading reference point for the promotion of sustainability change agents.

Previous: Economics of the Property Market