Up: Home : Distractions > Games and Books 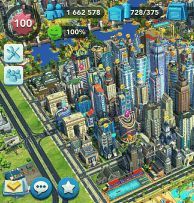 This was the game that introduced economics to a lot of people: as mayor of a city you face tradeoffs between public services and keeping taxes low, between encouraging industry and minimising pollution. There are many different versions. It is available as a freemium app (SimCity BuildIt) for Android and iPhones. If you want to play SimCity completely for free (and very slowly, and with 1980s graphics) it is online at the Internet Archive.

There are quite a lot of books applying economics to everyday situations, from authors including Levitt and Dubner, Tim Harford, John Kay, and David Smith. This category that is growing all the time: below are three books you might not have heard of.

A fantastic book exploring many topics with an economics edge- from divorce to drug use. Bowmaker gained a PhD in Economics from the University of St Andrews after being out of academia for five years. During those five years, he worked for a range of different institutions including the GES and HSBC markets. Bowman is now an academic at Edinburgh University.

“This exciting book shows that economics can explain a dizzying array of real world phenomena and that economics can be great fun. I recommend this book to anyone who wants to see the progress that has been made in using the tools of neoclassical economics to understand a wide range of seemingly irrational behavior.” -Edward Glaeser, Harvard University, US

The Soulful Science: What Economists Really Do and Why It Matters by Diane Coyle

Instead of analysing economics from a mathematical perspective, Diana Coyle talks fondly of economists and their role in the real world. Doyle has a PhD in economics from Harvard University and worked as the Economics editor for the independent. Throughout the book, Coyle humanises economics, using examples such as how to make poverty history, It’s an approachable, interesting read.

“Coyle shows how contemporary economists are bringing theory out of the classroom as they adopt a more pragmatic, humanistic approach to such problems as poverty and pollution.”–Edward Nawotka, Bloomberg News

By beginning with the bizarre idea that avoiding casual sex is causing more STI’s, Landsburg begins a trail of discussions. Stating how rational behaviour could prove to cause an irrational result for the rest of us, this book is a good read. Landsburg is a Professor of Economics at the University of Rochester.