Game Theory uses mathematical tools to find solutions in situations where interdependent parties make strategic decisions. Many developments in this field are quite recent and there is a wealth of material for curious minds. In looking at game theoretical applications in the real world, two models from Schelling and Shubik will be discussed. The first one shows why racial segregation is difficult to combat, and the second illustrates why people can be compelled to make irrational decisions.

A question of colour 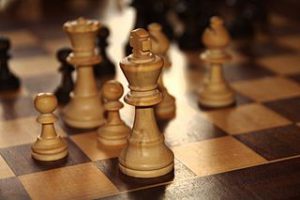 Thomas Schelling worked as a US government economist for the Truman administration. He became involved with nuclear strategy and showed that the capability to retaliate is more useful than the ability to resist an attack. Schelling won the Nobel Prize in Economic Sciences in 2005, for his contributions in the study of conflict and cooperation.  Concerned about racial tensions, in the late 1960s he started to investigate social interactions. He conducted experiments by moving differently coloured coins around a chequerboard. Each piece could have up to eight neighbours. A decision rule determined its new location, depending on its own colour and the number of neighbours like it. Schelling found that even a mild preference for having neighbours of the same colour (micromotive) could lead to segregation (macrobehaviour) as the model evolved. The mechanism has a positive feedback effect: when a coin of a given colour moves away, the balance is shifted against his old neighbours and this affects their decisions towards moving as well. Changing the tolerance threshold tips the scales from integrated patterns towards a segregated outcome. Once this is reached, it can be extremely hard to reverse. Not convinced? An interactive model is waiting for you to fiddle with.

When a dollar is not a dollar

Martin Shubik is a Professor at Yale University. He studied institutions and processes and his 1959 book, Strategy and Market Structure, laid foundations for numerous applications of game theory to industrial organisation. He was made a Distinguished Fellow of the American Economic Association in 2010.

In Shubik’s Dollar Auction game, a volunteer auctions off a dollar bill to the highest bidder. There is only one rule: the winner gets the dollar and the second-highest bidder loses the bid amount. For example, if A bids the minimum amount of 5 cents and B offers 10 cents, B gets one dollar and A loses 5 cents.

The setting is simple and the players are considered rational. However, as they will seek to minimise their losses, bids will ultimately surpass the value of one dollar! Self-interested behaviour leads to failure until someone decides that enough is enough.

When a situation escalates and negotiation seems impossible, it might be better to take an immediate loss, let the other party score a Pyrrhic victory and live to fight another day. Some are willing to bet you a dollar for that.

Konstantinos Dagklis is Chair of Birkbeck’s Economics and Finance Society.