Up: Home : After Your Degree: Where Next? > A Graduate’s advice part 2- Applying for Jobs

Tim van den Hoek Eklund graduated from the University of Liverpool in 2009 with a degree in Economics. 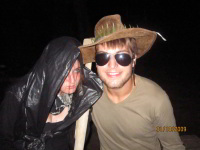 Since my last diary entry in January I’ve had an extended stay in Stockholm, Sweden, where I had the opportunity to experience the ideal socialist democracy first hand. It was risky going to Sweden trying to find a job since I was pretty much restricted to English speaking roles and I found the recruitment market very different to the UK.

A couple of weeks ago, having spent three months in Sweden, I made the decision to return to the UK and back to my hometown (not being here for six months it was rather strange at first). The main reason being that there are more job opportunities in the UK than in Stockholm, and it felt almost as though I was artificially handicapping myself when it came to the language; plus it’s warmer here.

The job hunt has been the predominant feature of my life since January, and it still is. Though I’ve made a great deal of progress since embarking on my quest I haven’t actually secured anything as yet, and with my continually deteriorating financial position coupled with no prospect of an IMF bailout the stress levels are on the increase.

Last year I read a book called ‘The Purple Cow’, on the advice of Rachel Elnaugh from Dragons Den. The book describes how to market your company to consumers successfully, and particularly describes that as times get tough, the tough ‘identify their market niche better’ (It’s counter-intuitive because isn’t it always tempting to try and appeal to as many people as possible?). I noticed it isn’t entirely different to what’s going on in the job market, you’re essentially marketing yourself to companies via your CV. So the million dollar question is: how to do it effectively?

First and foremost is to drop the idea that the probability of you securing a job is directly proportional to the number of CVs you distribute. For me it was the other way round: when I stopped applying for jobs left, right and centre I started to get responses. OK, it sounds simple: write your CV specifically for the role you’re applying for, consider how your skills fit those recruiters are seeking and demonstrate it. Bear in mind all the information the recruiter has about you is on that sheet of paper!

Matters have been only been complicated further by the London School of Economics accepting my application to enrol this autumn to study an MSc in Economics and Philosophy. This led me to change my entire approach to the problem. Now I’m applying to undergraduate placements with firms like Price Waterhouse Coopers, Ernst & Young and Mercer; these are very competitive positions and I’ve been put through to the interview stage for most of them.

Plus now I have the worry of how my studies will be financed, where I should live, what I should expect from London and the university life there. I noticed a few former LSE students had written on the Economics Network before and reading their articles came in pretty handy, giving me a good idea of what I might expect. The most significant problem I’m having is arranging finances. The LSE charges a huge tuition fee, which on top of living costs makes it almost impossible for me to live there.

Not being fortunate enough to have rich parents to pay for my fees and not having a job to save up enough in time I’ve used a lot of my time researching and applying for different grants available. I’m not one to shy away from such a task and tend to keep a positive pro-active attitude but at the moment the task seems insurmountable. Nobody seems the slightest bit interested in sponsoring me? What do I do? It’s a really bad situation, but I suppose I’ll just have to plough on!

Summary; since January I really haven’t had a great time at all. From a high of going to Malaysia and working on the amazing projects to being unemployed with no money is a bit of a contrast. I’m assuming/hoping this will be a ‘character-building experience’, or at least that’s how I’m going to classify it! I suppose if you’re given everything on a plate all the time, you’re going to think it’s your right to something rather than responsibility to earn it?

In any case, from my experience so far, it seems that economics graduates in general will have many of the skills employers are looking for. Ability to look at problems, identify factors, interpret them and solve the problem, again it sounds trivial but It’s more difficult than it sounds.

Next: Applications For Graduate Schemes